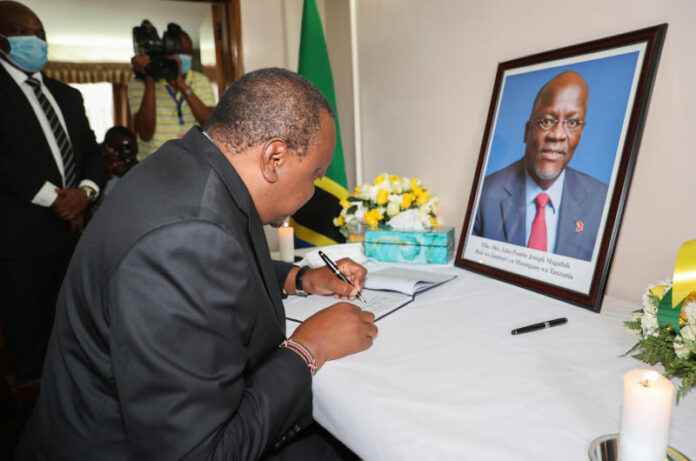 President Uhuru Kenyatta Today, Monday 22nd, cut his speech at the Jamhuri Stadium in Dodoma, Tanzania after hearing the Muslim call to prayer during the funeral mass of John Magufuli.

Uhuru who was eulogizing the late President John Magufuli temporarily stopped his speech for two minutes in honour of the Adhaan in a nearby mosque in Dodoma.

The adhan is the Islamic call to prayer, recited by a muezzin at prescribed times of the day.
Netizens didn’t fail to talk about it, and some commended him for being a great leader,

Activist Mutahi Ngunyi had this to say,

“There is NO SCHOOL for PRESIDENCY. How President Uhuru Kenyatta SENSED the Adhan MOMENT in Tanzania is a MYSTERY. And he NAILED it. The book of JOSHUA 1:9 was also POWERFUL. President SULUHU’s eyes SWELLED with Tears. I have a GOOD FEELING about President SAMIA SULUHU.”

@Asmali77 said,
‘Respect to my president Uhuru Kenyatta. Pausing his speech to let the Islamic call to prayers to finish.

That’s beautiful to see. The adhan is powerful.

So President Uhuru Kenyatta paused his speech at the late Magufuli's farewell ceremony when he heard prayers from a nearby mosque in Dodoma….Very respectful of our President.#FallAndFallOfRuto pic.twitter.com/8gRDOmR7Qd

@iAlenOfficial,
“Kenya’s President Uhuru Kenyatta stops he’s address mid stream in honor of the #ADHAAN in a nearby mosque in Dodoma!

Profound! 👏🏼👏🏼👏🏼👏🏼”
Obviously hakukosangi haters, some netizens felt that if Uhuru had the same self control on taking loans,Kenya wouldn’t be in so much debt while others remembered the kenol church saga in Muranga

@sylvia_wangeci seemed a little better, she tweeted,
“So president Uhuru Kenyatta Paused his speech to let the Islamic prayers finish, Wow!, He is well behaved out there, back in Kenya his police force teargassed worshippers in church in kenol,Murang’a under instructions from “above” 😒

Uhuru sent his condolences to the people of Tanzania saying the two countries will work together.

“He was a respected leader in EAC and the world. For several years, he has shown that Africans have the capacity to be independent,” he said.

“I am here to mourn a friend, a close friend, we used to talk on a daily basis and we exchanged ideas regarding Kenya and Tanzania and EAC.”

Uhuru said he was shocked by Magufuli’s death and had to make it to the funeral.

Zari Promises Diamond This On The BET Nomination