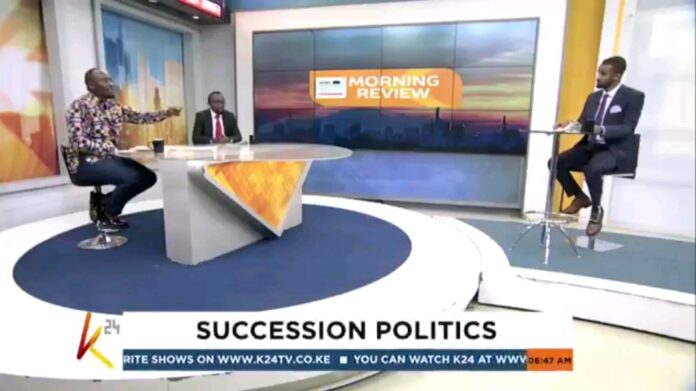 A bitter exchange erupted today morning as renown lawyer Ndegwa Njiru engaged with one of the defendants of Deputy president William Ruto.

It all began when lawyer Ndegwa Njiru accused deputy president William Ruto of being corrupt and getting engaged with people that are also corrupt.

“Look here, how can we have a president whose track record is questionable. We have not forgotten about the issue of Lang’ata road primary school, what about the land that the Weston hotel sits on?” Lawyer Ndegwa Njiru posed.

He claimed that allies of  William Ruto are very clean and not involved in any form of corruption as claimed by the ally of the Kieleweke faction of the government.

“Today if you want to know the guys who are extremely clean without any corruption whatsoever, they are with the Deputy President.”Dennis Nthumbi defended allies of the second in command.

Lawyer Ndegwa Njiru has accused the  William Ruto of creating class wars by trying to introduce the new economic model wondering where they will leave those people who own the tools of production?

Do you agree with Itumbi or Ndegwa? Do you think this country will ever be United? Kindly follow us for more political news