William Samoei Ruto, the current Kenyan deputy president is one of Kenya‘s most popular poultry farmer, boasting of a farm with thousands of chicken in his Sugoi home in Uasin Gishu county, from which he obtains both eggs and meat.

The deputy president who started his early life selling chickens along the busy Eldoret Uganda highway, recently revealed that by 2015, his family had pumped over Ksh15 million into their poultry investment.

Recently,  photos emerged online of thousands of eggs collected at Deputy President’s home in Sugoi, ready for market. In a photo that was shared online by Baringo’s leading Digital News platform, Baringo Capital News, it was reported that the DP’s farm produces a total of approximately 3.5 million eggs per day. This is remarkably amazing.

In an interview that was carried out by citizen TV in 2019, Ruto’s wife Rachael Ruto was quoted saying that she is the one running the farm and that she is using the proceeds from their poultry farm to fund and empower a local women group which she founded, called the Joyful Women Organisation. 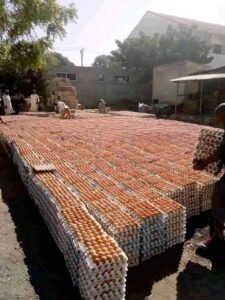 “We have always helped Joywo women with one-day-old chicks, where they rare, and after they have matured, we help them look for market by using our connections to sell at good market prices instead of them using middlemen and brokers,” stated Rachael Ruto during an interview.

The large number of egg production sparked an online reaction. Many users came out to react to the amount of eggs collected on a daily basis, with some finding it hard to belief, while others praising the DP, terming him a hard working man, who inherited the business talent from his late father.

Why misinformation will be the reason the the BBI...