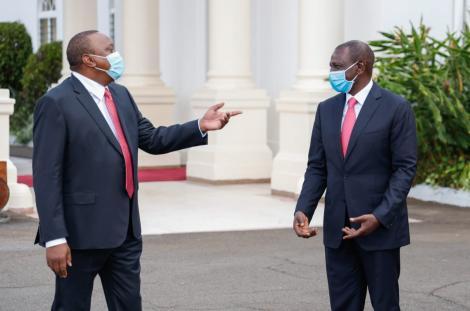 Efforts to reunite President Uhuru Kenyatta and his deputy William Ruto by Clergyman seem to have stopped after the real reason why the two are irreconcilable.

Uhuru and Ruto’s fallout begun immediately after the 2017 election when the president coined the term ‘tangatanga’ while complaining about his deputy going around the country campaigning when the election was just over.

Things further got complicated on March 15th 2018 when Uhuru and Raila Odinga walked out of Harambee House together and shook hands to the surprise of whole country.

The March 15th handshake between Uhuru and Raila marked the beginning of their political dalliance which farther widened the rift between the president and his deputy.

Section of clergy have been working hard to reconcile Uhuru and Ruto but so far nothing seems to bring them back together.

With less than a year remaining for Uhuru to retire, pressure has been growing on the two to have talks and end their differences.

This task had been taken up by the clergy who have been engaging Ruto and Uhuru in secret talks to have them unite.

However, the clergy who have been working to reconcile the two leaders are said to have given up on their tasks on finding out the real reason why Uhuru and Ruto don’t see eye to eye.

According to the People Daily, Uhuru is hesitant to reconcile with Ruto because he says the DP took advantage of his immunity to disrespect him.

Uhuru also said Ruto’s jeopardized his development agenda by starting a premature campaign for 2022 and pressurizing him to support his presidential bid just when he was starting his second term in office.

On his part, Ruto accused President Uhuru of shortchanging him and planning to endorse the opposition.