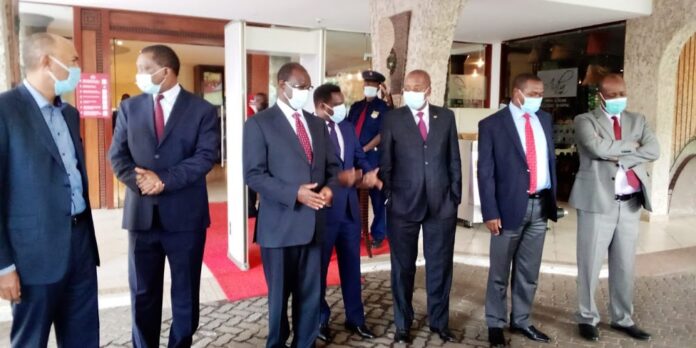 It seem like President Uhuru Kenyatta will be on his own should he decide to completely do away with his Deputy President William Ruto as far as the upcoming 2022 general elections are concerned.

Leaders in the Mt Kenya region have threatened that they will not give him support and his preferred candidate. Infact they say that the candidate of his choice will end up facing a humiliating defeat in Mt Kenya region.

The threats should be taken seriously because, just as it has been the case in the recent By elections where jubilee Party had lost with a landslide even in his home.

Addressing Kenyans through a video clip that has gone viral on Tuesday morning, a group of Mt Kenya political leaders led by Alice Wahome, Ndindi Nyoro, Rigathi Gachagua, Nderitu Muriithi among many others has now threatened to boycott President Uhuru Kenyatta’s anticipated political advice if it won’t Favour Deputy President William Ruto in the long run.

Basing on the circulating allegations that National Assembly Speaker Hon Muturi is being fronted by Uhuru as Ruto’s running mate, the leaders have welcomed the move but at the same time announcing that they must be given assurances that Muturi will cooperate.

“As Mt Kenya Region leaders, we are demanding that President Uhuru Kenyatta must thank his Deputy By supporting his political ambition. Any attempt to betray him ahead of 2022 polls will be receiving by a lot of resistance and Uhuru, you will be alone in the desert. Uhuru has only one option, to support Ruto in 2022. We shall fight him if he oppose Ruto,” Alice Wahome told Kenyans.

How To Perform Body Workouts To Make Them More Effective