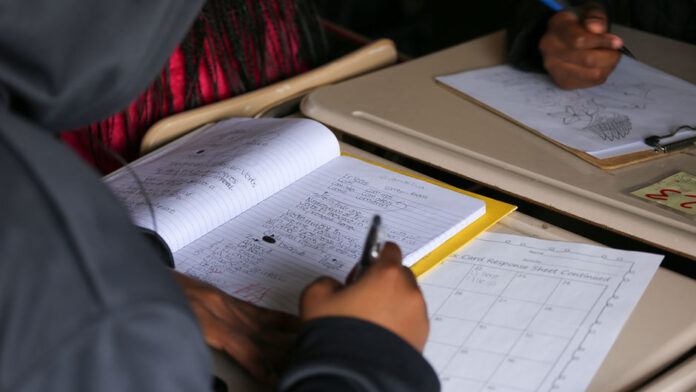 Drama unfolded on Wednesday at Karigu-ini Mixed Secondary School in Lari, Kiambu County after a Form 4 candidate attacked a police officer during examination.

Trouble began after the supervisor, Mr. Gilbert Kilonzo Munyao, demanded to frisk the male student, who was also not wearing a mask, before beginning of the CRE Paper 1 test.

According to a police report on the incident, the student refused to be frisked prompting one of the security officers, a police woman identified as Lennah Laurence, deployed at the examination centre to intervene.

The student physically and verbally attacked her causing the other police officer at the examination centre to come to her rescue.

After the second officer intervened the student ran out of the examination room picked a stone and hurled at a police vehicle in the school before escaping out of school without sitting the test.

“When the other police officer came to intervene, the said student ran out of the exam room, picked a stone and hit the windscreen of a police Landcruiser attached to CIPU Sub-county headquarters, Lari. The said student then varnished in the neighborhood without writing CRE Paper 1 exam,” reads the police report.

Rapper Juliani Describes How Bob Collymore Refused To See Him On...