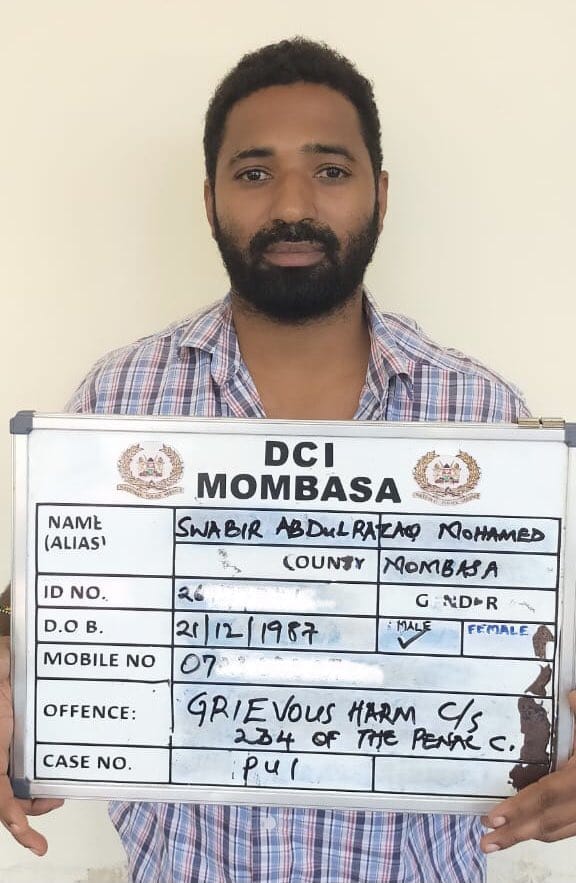 Detectives have early this morning arrested the man who was captured in a widely circulated video clip, torturing a suspected offender.

Swabir Abdulrazaq Mohamed, 33, who works as a security guard at Ajab Unga Factory in Shimanzi, Mombasa, went into hiding immediately.

A special team of detectives launched his manhunt. However, his disappearance was short lived since the DCI anonymous call centre, received a tip-off on his whereabouts from a concerned member of the public and pounced on him.

Detectives have since established that Abdulrazaq tortured the victim, for allegedly trespassing into the factory’s premises. Using a burning mosquito net, Abdulrazaq subjected the victim to untold anguish by burning him using the flaming drops of the net,as he whipped him using a plastic pipe. The victim, whose hands were tied and neck secured on an electricity pole using a rope, wailed in despair as he begged for mercy, from the visibly happy tormentor. 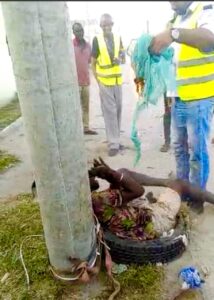 All this happened as curious onlookers milled around appearing helpless,as some recorded the despicable scene using their phones. The victim who is yet to be identified, is said to be a street urchin who ekes his living through seeking alms in the streets of Mombasa.

Abdulrazaq alleges to have handed over the victim to two Police Officers,whom he cannot identify or remember the Police Stations where they are attached.

However, we have since established that no such report was filled in any Police Station within Mombasa on the material day. Further, in the victim’s state, there isn’t a Police Station

that would have booked him before he was treated. Detectives are currently looking for the victim to file his statement. Meanwhile,

the suspect will be arraigned in court tomorrow to answer to charges of grievous harm, with charges of attempted murder also being considered.