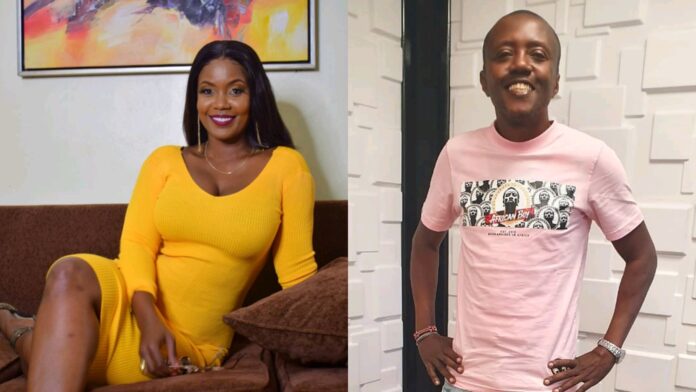 Maina Kageni, a redio presenter in Classic Fm which is under Radio Africa has confessed his undying love for actor and recording artist Sanaipei Tande. Maina says that his crush is not a secret even to her.

The radio presenter has been recorded on tape several times confessing his love for the actress. He had even at one time revealed that he had proposed that he and the recording artist have a baby together. Sanaipei turned down the offer of course, just like every other offer from the radio man who today agained confessed his undying love for Sanaipei.

Seen on a video shared shard by his employer Classic FM on their official Instagram page the bachelor asked in a game of kiss date marry who he would go for between three Kenyan celebrities he swiftly answers Sanaipei in all categories before confessing his love for her.

Sanaipei who worked with the radio presenter once for radio Africa’s Kiss FM has on the record stated that he sees him only as a friend and is yet to respond to his latest confession.

Diamond Responds To Claims That He Copied Otile Brown’s Song