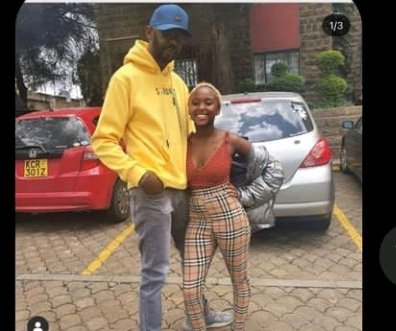 Kenyan Media personality Andrew Kibe was accused in January by Blogger Edgar Obare known to be the Kenyan tea master of luring young girls others being minors by sleeping with them and paying them peanuts.

Kibe is a Kenyan Media who has worked with Kenyan top radio stations such as NRG and Kiss 100 is opened his own redio station called Rogue redio.

Edgar Obare fans identified one highschool girl by the name Mitchell who was spotted hanging with Andrew Kibe yet she is a student.

Blogger Obare tried to reach out Mitchell to give her side of the story unfortunately he received no response.

Today, Mitchell responded to Blogger Edgar Obare since she has been in school.

Mitchell revealed she is a 17 year old girl.
She says that she’s so ashamed and can’t even face people 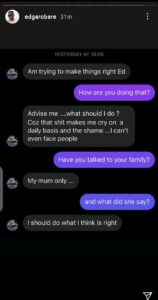 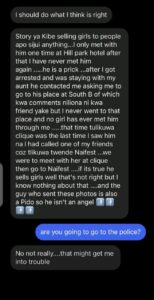 Mitchell also asked for advice from Edgar Obare since whatever she did always makes her cry everyday and the shame after the expose her not able to face anyone.

“Advise me, what should I do? Coz that shot makes me cry on daily basis and the shame…I can’t even face people.”

On the issue of Kibe selling girls to people,Mitchell said she had no idea and says she only met him only once. Mitchell doesn’t wish to go to the police as she fears that it might get her in trouble.