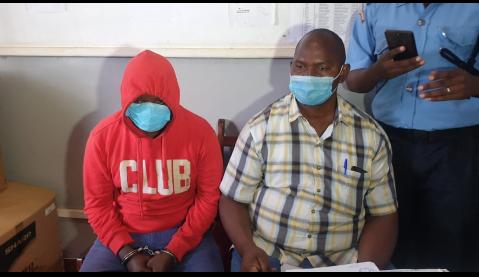 Evans Karani a suspect man in the murder of 25-year-old Catherine Nyokabi, will remain in lawful custody for another 14 days until police finish their investigations. On Monday morning, the defendant appeared from the virtually Juja Police station before Thika Law Courts Magistrate Oscar Wanyaga.

Mr. Karani, who had previously told the police that he did not regret murdering his lover of two years, asked the magistrate to speed up his sentence. The case will come up for mentioning on May 3.

His arrest came over the weekend after the body of his estranged lover was discovered 50 meters from his car in the Ndarugu area of Juja, Kiambu County.

Detectives believe his car got stuck in the mud when he dumped the body, forcing him to abandon it at the scene. He was later arrested at Githurai Kimbo. He apparently said that his love for nyokabi could not allow her to see someone else.

In the meantime, the Nyokabi’s family is seeking justice for their slain kin. Her father, Gitonga Njogu was at the Juja Police Station on Sunday afternoon to get an update on investigations into his daughter’s brutal murder.

He revealed that the main suspect in Catherine Nyokabi’s murder — Evans Karani — was well known to the family. The two had been in a relationship for two years.

That fact came to light two weeks ago, after which the family disapproved of the relationship. He believes that this was the motive behind the murder of his 25-year-old daughter, who has left behind a 6-year-old child.

After viewing his daughter’s body at the City Mortuary, Gitonga said brutality cannot define what his daughter Nyokabi went through on Thursday night.