The directorate of criminal investigations(DCI) have realised a couple of misconducts and criminal history related to Killer cop Caroline Kangogo who is currently on the run after shooting two men in Nakuru and Juja.

According to the reports given by the DCIs, it has been reported that the wanted police has not begun her spree recently. 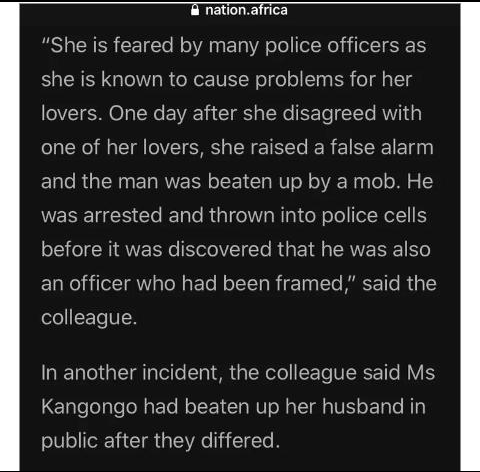 Criminal investigations related to the officer has revealed that she at one time raised a false alarm on one of her former boyfriends after he decided to leave her.

The man was allegedly beaten by a mob before it was later discovered that he was a police officer.

In another incident, Caroline is reported to have beaten her now ex husband after they allegedly had a misunderstanding over unknown issues.

This is happening at the same time when the police are currently searching for her for allegedly killing two men.

Corporal Kangogo reportedly shot and killed Police Constable John Ogweno in his car parked within a police station in Nakuru on Monday. She, afterwards, fled with his weapon, a loaded Ceska pistol.

Kangogo is then reported to have later that same day emerged in Juja where she, yet again, shot and killed another man in cold blood.
The rogue police officer lured her second victim, since identified as 32-year-old Peter Ndwiga Njiru, to Dedamax Hotel in Kimbo at around 4pm.

She shot him on the head at pointblank range before emerging from the room at around midnight and fleeing to an unknown destination, leaving the body sprawled on the bed.