A helicopter that had carried the former Prime Minister Honourable Raila Odinga crashed just minutes after he disembarked.The chopper had ferried him from Kisumu to Gem Siaya county, together with his four people entourage.

Despite the harrowing incident, fatalities were not recorded and the pilot only escaped with Minor injuries. Denis Onyango, Raila Odingas spokesperson released a report that read.

“Former Prime Minister Raila Odinga is safe following an incident in which a chopper that had flown him from Kisumu to Gem in Siaya county crashed shortly after dropping him and his entourage of four people.

The helicopter, Bell 407, registration 5Y-PSM had dropped Mr Odinga at Kudho primary school in gem when it attempted to take off to create space for other planes.Unfortunately, it crashed .

There were no fatalities as the pilot and four others on board escaped with Minor injuries.
Mr Odinga successfully proceeded with his scheduled activities with the president ” 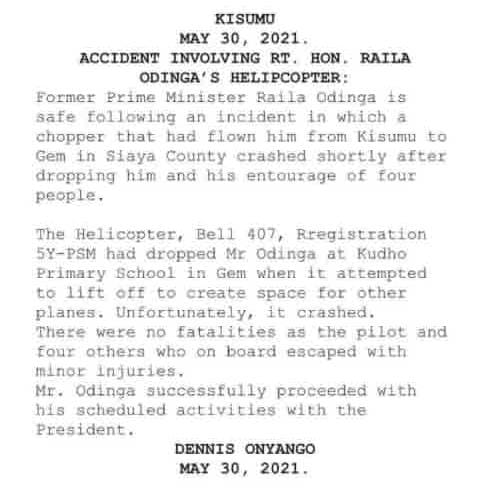 Raila Odinga is safe despite the rumours doing rounds on social media that he was involved in any sort of accident.