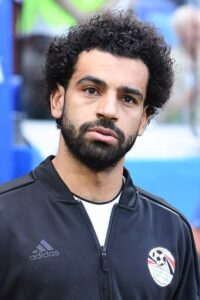 Liverpool’s Mohammed Salah has remained one of the best forwards and players in the English Premier league ever since he returned to the league few years ago. He has equally helped Liverpool win some important trophies, thus ending the club’s years of trophy drought. And his consistency in form and scoring ability has earned him several awards, accolades, praises, admiration and recognition.

Well, the Egyptian international has just set a new Premier league record after scoring over 90 goals in about 150 league appearances. Surprisingly, Salah has surpassed Thierry Henry’s 92 goals in as many as 150 EPL goals.

According to the chart which features about six outstanding EPL forward and strikers who have scored most goals after reaching 150+ appearances in the English league, Mohammed Salah occupies the 5th position with 93 goals.

Following the new record set by Mohammed Salah, several football fans have been reacting, with many lavishing words of praise and admiration on the 28 year old former Chelsea player.

And it is equally important to mention the fact that Salah is the only player who is a winger in the list, hence being a huge credit to the young man.

It will equally interest you to know that most of the 93 goals weren’t from the penalty spot, it is only thirteen (13) goals that he scored from the spot kick.

And in the course of the 150 EPL games, Salah has made a total of 32 assists, which further proves that he’s truly a team player.

Big Blow To Ruto As The President Makes The Following Move

20-year-Old Serial killer Confesses Why He Sucks His Victim’s Blood Before...