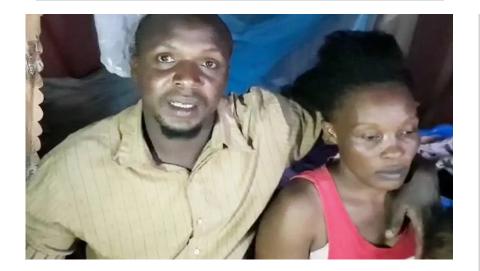 Kepha Nyambane Ogoka, a man who blocked President Uhuru Kenyatta’s motorcade in the Lucky Summer area trended for the better part of that day and the next.

Speaking through the standard, Nyambane says he only blocked the motorcade to catch the president’s attention and pour out his problems.

He has also painfully narrated how he together with his small family of five, the wife, and his three children, have been finding it hard to put some food on the table and also to pay for his children’s school fees.

Ogaka says that hes still fearful that the police may pursue him for blocking President Uhuru’s motorcade, an action which raised a lot of questions.

But Ogoka says he does not regret his actions even as it remains clear that he had put his life in danger.

“Problems drove me to do what I did,” Nyambane

” I have three children, whom I’m unable to comfortably fend for. As a result, my sister took in one of my children. The other one, who was recently sent home for school fees has reported back to school after her head-teacher watched me attempting to catch the President’s attention due to frustration,” Nyambane

When the President’s official vehicle was about to drive past the location, Nyambane actualised his plan: jumped on the road, at the “right time”.

“I heard him (Kenyatta) telling his bodyguards: ‘achana na huyo kijana[leave that young man alone]’. He, thereafter, addressed me, saying: ‘tutaongea, tutaongea [we shall speak some other time] before rolling up his car window’,” said the father-of-three.

He still hopes to speak to the president someday.

Ruiru; Another Man Murders His Lover, Stays With Her Rotting Body...