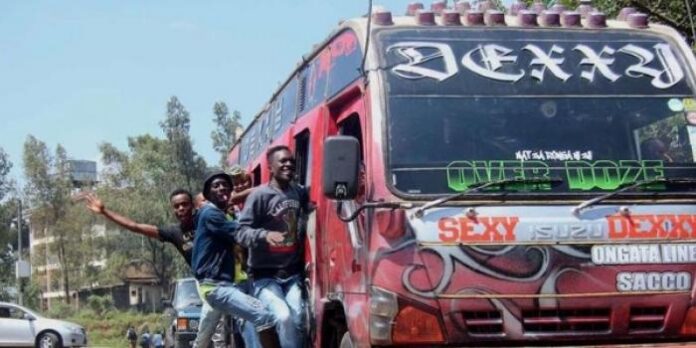 “Nichunie chaves kiasi.” The bloodshot eyes can offer a glimpse of what my matatu tout expects from his compatriot but that’s the wrong guess. The compatriot is high and trippy. He goes to the pocket and slips out a small clear sachet with some dusty content. It looks like tobacco but upon closer scrutiny, it is some finer form of tobacco.  They help each other unease the rubber band that acts as the sealant and the tout sinks a thumb into the clear sachet and scoops a small but sufficient powder from it. The compatriot mimics this and fastens the rubber band round the sachet and it disappears into his pocket again.

The tout sniffs the content on his thumbs while his compatriot wisely fills up the lower jaw and upon a closer look, a bump of the content is visible on the lower lips. Within a few seconds, the exchange is over and they are ready to work. The tout had been holding a cigarette stick since I boarded the bus and at some point, I could feel that he really needed a smoke. He calls on his driver for a lighter and fades into the bus stop with a puffy smell diligently following. The matatu is a half full and he leaves the filling task to his compatriot.

The herculean task begins once the ‘conductor’ delegates the job to kamageras’. They have to ensure that the empty seat behind you has been occupied before the matatu leaves the bus stop and at the same time, you have to bear with them as they do it. It is not always a rainy day.  In my observational experience travelling across different towns, many bus stations have these ‘youths.’

Often times a ‘Nissan’ will stop at a bus stop in a random town and once the door starts sliding open, a group or a few youths run towards the door with the sole intent of helping the tout gather travelers. They do not look for interested travelers as in the case of brokers and travel agents. Rather, they convince people at the bus station to choose a particular matatu to their destinations. In other cases, they help in negotiating the fare prices on behalf of the passengers and the tout. However, trust the word of a kamagera on the fare prices at your own peril.

Kamageras have a way with words and some force in the hands. If they do not convince you sufficiently, they can push you conveniently.  I hate a grown man who thinks and likes pushing other grown men. I have found myself in awkward situations on previous occasions while dealing with these people. I don’t like people laying hands on me. The disrespect sometimes trickles through the mouth which is their instrument of work. If you want to experiment you verbal bursts levels, I challenge you to try a one on one with a kamagera any day that you feel violated by their actions. I am not a pessimist but I can guarantee you that you will leave the challenge a changed person. In case you are a slow learner, the lesson will be fast.

Come to think of it, it is a frustrating job like any other job. I once held a conversation with a man who works as a kamagera. It was one of those late evening rides. These rides are often careless. Driven by an urge to go back home, the matatus are often crowded and stuffy. Stories of strong soldiers conquering the day dominate the conversations among strangers. I have made a couple of drank friends during these rides due to their stubbornness. If they want to tell you something, you have to listen to it or the ride while be uncomfortable for you and a boring one for them. 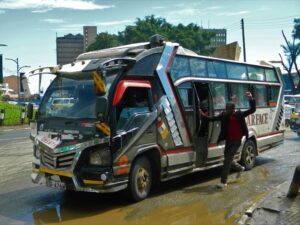 On this day, I met the stubbornness of a drank kamagera. He is the father of three and the proud husband of one who gave me their occupational name. So without a doubt; the youths at the bus station have a professional title and a code of conduct. They have a place of work too. For example, in his case, he wakes up every morning, bids the family farewell and takes off with his backpack which has a water bottle and some lunch. I had noticed him at a junction but what caught my attention was the small backpack of ‘that man’ who on this day was seated beside me.  The whole day is spent meeting different passengers and convincing them to pick a particular matatu of his choice. For every matatu that ‘ata-boil’, the matatu tout has to pay him a certain amount of money.

It is a condition and the touts respect that. It is also a conduct that if you don’t succeed in getting a passenger into a matatu, you have to respectfully let it leave the bus stop without getting anything. Sometimes there are crooked touts too who find it easy taking advantage of their labor. Once their matatus are full, they bang the door and leave you at the same spot where they found you. “They do not respect the grind”

The compatriot succeeded in filling the matatu by the use of his remarkable, witty and persuasive slang. I bet the contents of his lower jaw were seething the gum with discomfort and as he ran to spit some saliva on a drainage trench, the tout banged on the door to signal the driver to take off. From the window seat I could see the tipsy fellow chasing after the matatu but he knew the futility of his efforts. At a glance, he was left where we had found him.

Have a fruitful day.

By Calpas
The Good Vibes Don