The story of 23 year old Harun Gatari Njeri was first aired by Tuko several days ago. Harun Gatari has huge growths on his hands and cannot do anything by himself.Harun’s medical condition that has affected both his hands making him unable to do anything.

All this started while he was 7 years old as a small pimple. After 15 surgeries in Kenya, unfortunately the condition has become worse to a point the joints in his hands can’t move anymore. He ended up dropping out of school and afraid of burdening his mom, he took to the streets of Nairobi to seek financial help from well wishers.

Luckily, a good Samaritan took him out of the streets and has been hosting him at his home.

During the interview with Tuko, Gatari revealed that his hands can only get back to normal after a surgery in India which requires 5 million.

Jalangoo heard of this story and through them, Jalangoo set to meet him at 1pm at ‘BONGA NA JALAS’ to air his story and plead with kenyan’s to help him get medication on a initiative 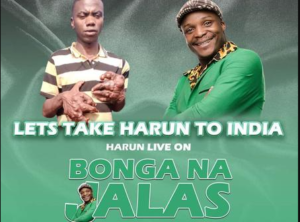 “Let’s take Harun to India.”. He has been in fore front helping several through his initiatives and changed many lifes and lifestyles from worse to better situations.

Few calls from Jalango’s friends who include his business partners, media personalities, politicians, musicians and celebrities funds started to be raised. Fans also were not left out in support as kenyans were sending through the pay bill number. By the end of the show, an estimate of over one million shillings was raised within an hour.

Natalie Githinji On Her Way To Recovery