Radio Africa owned station Homeboyz Radio has in the past few days been on the headlines though for the bad reasons after their presenters made controversial comments on a lady few days ago.

The Presenters in discussion here are Shaffie Weru, Dj Joe Mfalme and Neville Musya who host the breakfast show on the station.

The trio have found themselves on the wrong side of social media after airing their controversial remarks on how women should stop being cheaply available to men while using an example of Eunice who met a cruel fate after going for a date with a stranger.

Kenyans did not take lightly the comments forcing the trio to apologize which was followed by a two-week suspension by the radio.

However, the EALB’s decision to suspend all adverts with the media group seems to have changed the minds of the radio owners who on Sunday midnight announced the termination of the presenters services. 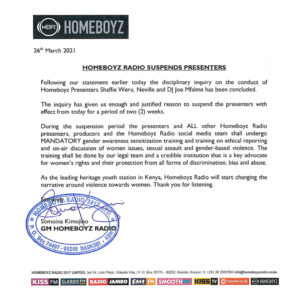 THE JOURNEY OF COCA-COLA COMPANY