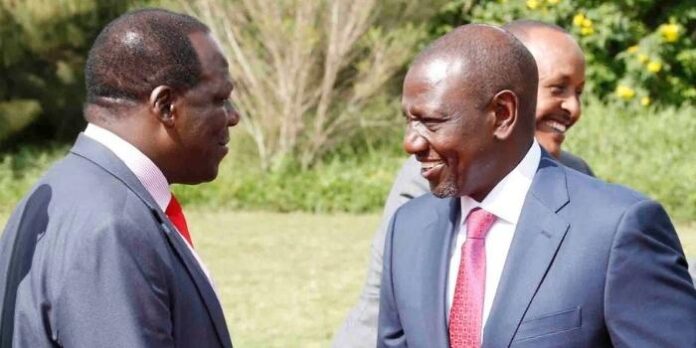 The Orange Democratic Movement (ODM) has now admitted that its deputy party leader and Kakamega Governor Wycliffe Oparanya indeed met Deputy President William Ruto.
ODM, in a statement issued by Director of Communications Philip Etale, said Governor Oparanya however briefed party leader Raila Odinga on any and all meetings he had with the DP.

The party however denied any claims that Governor Oparanya met the DP to discuss a possible alliance, further urging supporters to read mischief in such claims.

“I want to categorically state that the ODM deputy party leader Wycliffe Ambetsa Oparanya, the governor of Kakamega County is a loyal member of the party and an ardent supporter of his boss, party leader Raila Amolo Odinga. Secondly, may I state here that, yes it is true Hon. Oparanya has held a few meetings with the Deputy President William Samoei Ruto, be it in Nairobi or elsewhere,” read the statement.

“And as the great Mahatma Gandhi once said ‘Whenever you are confronted with an opponent. Conquer him with love’, in all instances, Oparanya has been briefing our ODM party leadership including the party leader on every detail of his discussion with Ruto. Oparanya has not been on any mission of betrayal as some people may want it to look. Sometimes in politics, it is good to learn what your opponent is plotting and be able to get the best defense to counter them.”

It further added: “Our ODM members and supporters should therefore not read any mischief in the said meetings that meetings that our DPL has held with the DP.“

During an interview on Citizen TV, DP Ruto admitted to have met Governor Oparanya at least 5 times.

Have They Broken Up? Corazon Cryptic Message Hints On A Possible...