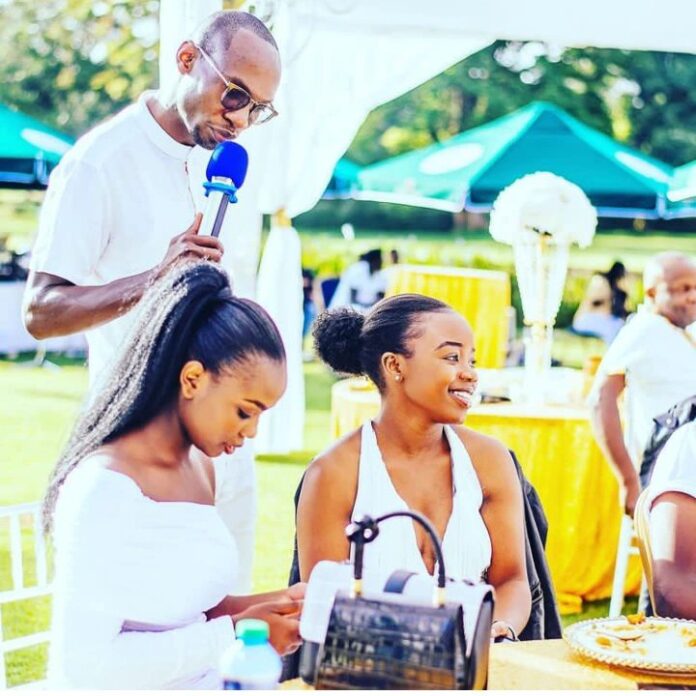 The head of English comedy, Dr. Ofweneke, has taken to expose on social media that actress Yasmin Saiedi has been crushing on him. In the instagram post, Ofweneke has posted that he has even told her to delete his number.

This act of the legendary comedian has caused commotion from Netizens. It’s actually hilarious of how the events unfolded. Yasmin is popularly known as Maria wa Kitaa from the big role that she played on Citizen Tv’s local drama, duped Maria.

This is one of the best local show in Kenya. The Mara show is really popular, something has led to many Kenyans watching it.

In the photo below, Maria wa Kitaa together with her best friend Linda Alexette, whom also was an actress of the Maria show. Dr. Ofweneke  is seen to be taking to Yasmeen while she is on her phone doing something.

Ofweneke is a multi-talented comedian. Apart from his english comedy, he is a renown and widely celebrated MC too. His nigerian ascent is what makes his fans love him more. He hosts ‘Hello Mr.Right’, a show being aired on Rembo Tv.

Before the corona pandemic stroke Kenya, he used to be on Standard Media Group, hosting the Thursday Night Live show (TNL) on Ktn Home.

After the Maria show came to and end, Yasmeen has been doing content videos on youtube alongside Linda. Hope this will pay them off well, just like Maria show used to pay them quite decently.

Dr. Ofweneke message to Yasmeen is heartbreaking to the famous actress,  Maria wa Kitaa. Hope it won’t deviate her from the right path of his her ambitions and dreams.