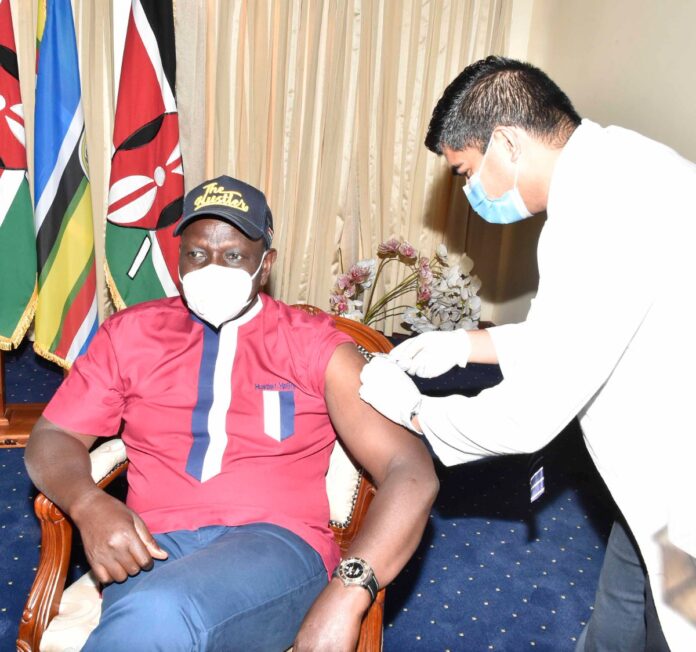 Deputy President William Ruto has defended his decision to go for the Russian-manufactured Sputnik V vaccine instead of the AstraZeneca vaccine that other members of the Cabinet including the President publicly received.

In an exclusive interview with Citizen TV, Ruto said he was not invited to the vaccination exercise for Cabinet members and other top government officials that happened at State House, Nairobi on March 26, 2021.

“When the President decided that it was time for himself and the Cabinet to take the vaccine, I think inadvertently someone forgot to invite me and so I was not available during that exercise. I am not blaming anybody maybe some secretary there forgot to inform me,” said Ruto.

He went further to state that even though he was not invited to State House for the Cabinet vaccination exercise he still had other options and therefore he opted for the other available vaccine; the Sputnik V, which he says he paid Ksh.7,000 for the jab.

“If I did not go State House I had the choice of going to queue in the health centre next to my residence here but what would that do?… I would have probably taken a vaccine that would have been taken by a mama mboga or somebody else. The vaccine I took costed Ksh.7,000 to a deputy president. You want to tell me I cannot pay Ksh.7,000 for a vaccine that is available; not because it is different or expensive but because we have 1 million vaccines and we have to vaccinate 20 million Kenyans,” said Ruto.

The DP disagreed with the move by the government to suspend the use of the Sputnik V vaccine and to block the private sector from taking part in the roll out of the jabs saying:

“It is my position that we should have every available vaccine type not withstanding. We should encourage the private sector to roll out as long as it is approved by the government. Let Kenyans who can pay, pay.”

He added: “The most important exercise we should be engaging in right now is vaccination because once we have vaccinated 70% of Kenyans that is the only way we can reopen this country.”

The DP reiterated that the Sputnik vaccine was approved by the Kenyan government, adding that if he had been invited to the State House vaccination exercise he would have availed himself and hence his decision to also get vaccinated publicly.

He went further to state that during the Cabinet meeting where the President directed that all Cabinet members get vaccinated, there was no debate on which vaccine they should receive.

They are actually insulting us in government. Soon we should be registering Johnsons & Johnsons, Pfizer and other vaccines because clearly there is a scramble for vaccines,” said Ruto.

“When I wanted to be vaccinated, the person who was available was the person who had the Sputnik vaccine now that the government has banned it I have no problem.”