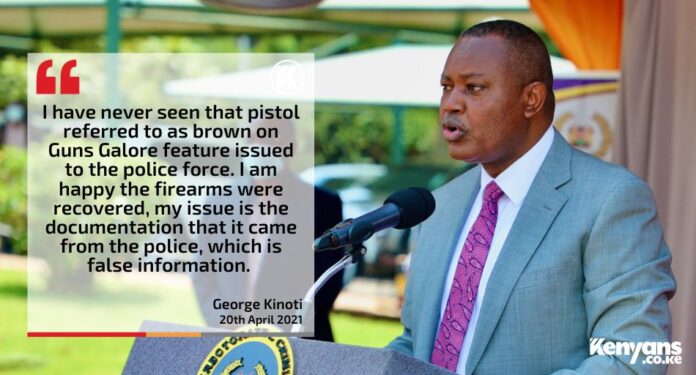 The Directorate of Criminal Investigations (DCI) now says the AK-47 assault rifle that was seen in Citizen TV’s ‘Guns Galore’ exposé was a Chinese replica of the Russian weapon.

During a press conference on Tuesday, DCI boss George Kinoti, who was flanked by a team of ballistic experts and security personnel, stated that the gun lacked the serial number that is typical of rifles issued to Kenyan security agencies.

“As we will demonstrate to you today, these guns do not belong to our police force, all our firearms have certain characteristics that these ones do not have as our ballistic expert will show you, ” the DCI boss said.

DCI Kinoti: I was a never approached to collaborate in this kind of operation (#GunsGalore), this was a fantastic job. My only concern is what if something could have happened to those journalists? If it could have turned tragic… pic.twitter.com/4nuePRLbn7

Charles Mwongera — the directorate’s ballistic expert — who was also present at the briefing, dismantled the assault rifle and determined it to be a replica, claiming that several of its parts were taken from different guns and did not correspond with its serial number.

“This gun is a copy of the Russian AK-47 made in China, its parts are also be from different guns as their serials do not correspond with the guns serial number,” he said.

At the same time, he said that the rifle’s modifications — such as the copper wire on the cleaning rod and decorative pins on the buttstock — were typical of rifles used by cattle rustlers in Northern Kenya.

He also discounted the Turkish-made pistol found during the exposé as a non-lethal firearm readily available at licensed gun shops and in the criminal world.

“We call this a baby pistol, you would normally find it in the criminal world, they have recently been on the increase, it is not a strong weapon,” Mr. Mwongera added. He continued: “This type of magazine cane be bought from any licensed guns and ammunition dealer, same with these round of ammunition which appear to have been from a hand-gun,” Mr. Mwongera added.

Still on the subject of firearms, Mr. Kinoti dismissed the ‘baby’ pistol, claiming that he had never seen it used in the police force during his time as a cop.

The exposé, which took over a year to put together, drew the ire of Kenyans and human rights lobby groups, who demanded that the claims be urgently investigated. The lobby groups also called for for protection of journalists who work in risky conditions.

Fresh Twist As Autopsy Reveals The Following About The Two Kids...