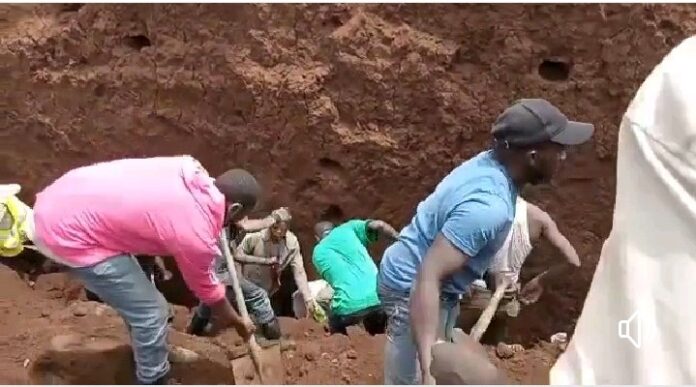 Panic has hit Kirinyaga County in a small town called  Kiandanka  after an unknown number of workers were buried alive.

News hitting  Kameme Tv, the men were working at a construction site when a huge chunk of dust buried them.

Residents and good samaritans rushed to the scene to try and rescue the innocent souls.

Firefighters with more sophisticated types of equipment have been called to the scene to aid in the rescue mission.

The horrifying incident comes barely days after nine people were crushed to death at a construction site in Kilimani.

Earlier reports indicated that the said workers including two Chinese nationals met their deaths after a crane malfunctioned.

For the longest time, Kenyans have been urged to observe the set precautions to avert such occurrences.

This is not the first incident where innocent souls have been lost at workplaces.

People have been urged to avoids uch risky areas as they might end up dead looking for money.