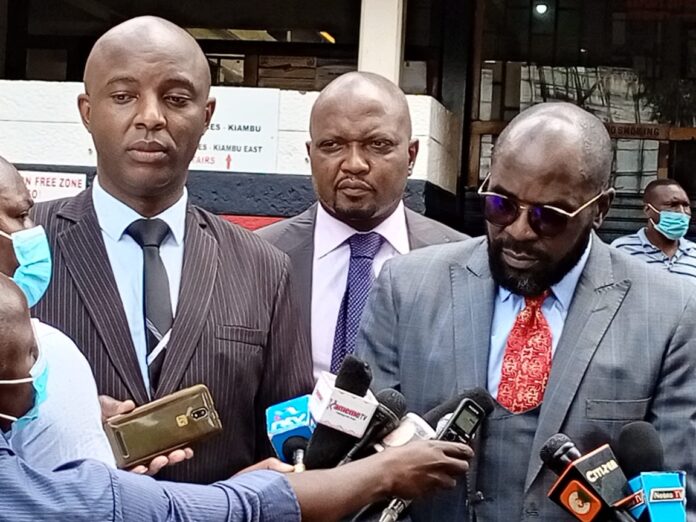 Murang’a Senator Irungu Kang’ata has revealed his disappointment will the the ongoing State persecution directed at Tangatanga candidate for Juja Constituency by-election.

The former Majority Whip in the Senate Assembly has revealed cases ambitious Koimburi was charged with. Mr. Koimburi was alongside his lawyer Cliff Ombeta and his party boss, who is also the Gatundu South Member Of Parliament Moses Kuria.

Koimburi isnin a race to replace the late Francis Waititu who was popularly know as Wakapee.

According to the Murang’a Senator, Mr. Koimburi was charged for offenses he allegedly committed in 1994, something according to Irungu Kang’ata is nothing but state persecution directed to the Juja Constituency by-election candidate.

Tangatanga candidate in Juja Mr. Koimburi has received a lot of tribulations from the state. Today he was charged in court for offenses he committed inn1994. I was in Kiambu Law Court with Cliff Ombeta to represent him. Moses Kuria was present,” Revealed Irungu Kang’ata.

Tanga Tanga candidate in Juja Mr. Koimburi has received lots of tribulations from the https://t.co/QKDcbQ1Kre he was charged in court for an offence he allegedly commited in 1994!
I was in Kiambu law courts with Cliff Ombeta to represent him.
Moses Kuria was present. pic.twitter.com/LBUp7v65PJ