In case you are excited as you prepare to read this, I do not promise a secret diversion that the traffic police are not aware of but before you are done, you will be nodding or entertained nevertheless.

Last week on Friday, motorist who had broken the curfew hours found themselves stack across different parts of the city after the police decided to act on the orders from above.

Unprecedented times for many. Often times, I have been unable to beat the curfew and over the weekend starring at the videos of motorists on the roads I thought of the person who shares my daily struggles.

Social distancing in public transport is a shaky affair. Sometimes kadere and his tout may decide to live and hustle according to the set rules and regulations. Other times, being a man of integrity leads to disagreements with the owner of the nganya and therefore, they have to bend the rules albeit a little to accommodate their need to hustle and please the employer.

During this particular day, the afternoon hours on the roads are characterized by low fares and drivers and touts high on kajaba and Demakufu on the Roots selection on the stereo interspersed with some of Joe Mfalme and other little known selectors on free promotional airplay.

In case you feel the boy child struggle is a scam, it is always a hustle to secure the front seat kwa nganya unless you have some connections. The front seat door slides open automatically for them ‘gyallis’ with white faces, black bodies and overgrown nails on stick-ons. Rangi huchanganya.

On this day, lady luck was on cover. I had the kadere and for once while using public transport I was sure that I would enjoy the high fare price that has to compensate for social distancing. This was a concern but for kadere, it was one of those days that integrity comes after the hustle. However, on this, the guy who joined us on the cockpit was a former workmate of the pilot.

The unmasked exchange that ensued had me worried at first. Starting off in the ‘Flight patois’ which is a mix of Kikuyu and some street sheng that I couldn’t the meaning to words and finally transcending to the ‘normal people’ sheng because they wanted a neutral party to end the confrontation and that had to be me.

Being the wise son of the soil I am, I asked for an overview of what had transpired before the heated confrontation and therefore when the case trickled down to my decision, all I had to say was that the driver was justified in punishing his colleague. 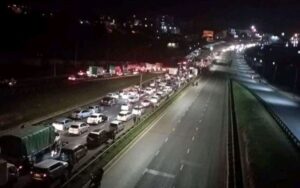 Why? Who leaves work without a reason and sends a lazy replacement? ‘Only someone less interested in the work that they do.’ The driver had given the verdict and all I had to do is seal the fate of the champ. For once, I felt the supremeness that entitles the lawyers to challenge the way we live.

However, my supremeness would not help in convincing them to have a mask on. I wasn’t intent in telling grown men how they should live their lives either way. The high spirits of the kajaba were now visible and kadere was doing his magical things perfectly under the influence. ‘I need to get home with something on my pocket today and this jam keeps frustrating my efforts today.’

Back to the people stack on the highway past the curfew hours. Among them is a mother who has been trying to make ends meet for the sake of a generation young enough to stay home and wait.

A father who was picking some items for the dinner table and is now thinking of tossing the bread into his cup holder but the barley on the whisky and the yeast on the wheat zitamshika.

A youth from a conquest and a lady on a quest. Orders from above are always a complex affair. May Father God from above always give a fair trial.