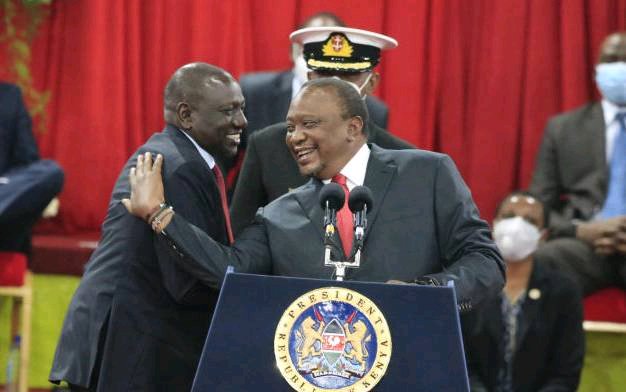 Deputy President William Ruto has spoken on what he whispered to President Uhuru Kenyatta on October 26, 2020 during the Building Bridges Initiative (BBI) launch at the Bomas when the President took a swipe at him for starting early campaigns.

In his speech, President Kenyatta hillariously accused Ruto of having lost focus on the Jubilee agenda and started early campaigns for his 2022 Presidential bid.

Speaking to Radio Jambo  Today Morning, Dp Ruto revealed that he told the President that he was planning to hand over the leadership of the country to another person other than him (Ruto).

He also said that there was a plan to oppress him after the 2017 General Elections, a plan he says has flopped.

On matters of party politics, Ruto said that he is associating with the United Democratic Alliance (UDA), after being flushed out of the ruling Jubilee Party by “intruders”.

He also revealed that he is “building UDA to become a national party” that he will use to vie for Presidency in 2022.

Here’s Why Frasha P-Unit has Launched An Attack Against Comedian Eric...