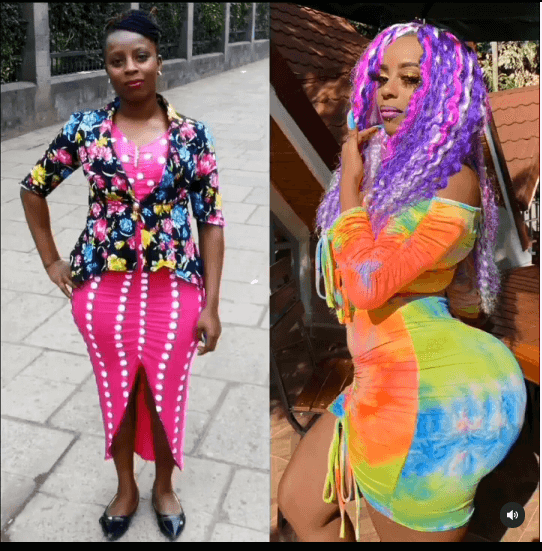 You all know who this Manzi wa Kibera is. She is one the fast upcoming socialite in Kenya and has been hitting our headlines recently. Manzi wa Kibera just participated in the famous wife material show season 2 even though the show was cancelled even before it grew old.

She had to go back to her own slum home even without making some cash from the show and at some point earlier on she claimed that she had became famous but also broke.
Anyway, that aside, Manzi wa Kibera is such a very bold lady who often does not fake her own life.

She leaves the real her and even though many netizens troll her, at least she always speaks her own mind out the way she is. On her recent interview with Eve Mungai, she was quick to say that Vera Sidika has been her beloved role model for over eight years now.

She even claims that she was happy that Vera at least reposted a photo grid that she had once posted on her own Facebook account. According to Manzi wa Kibera, she claims that people always associate her for being Vera sidika’s look alike as they even got the same huge curve looks.

She claimed that it’s only that she has no money at the moment but she is growing and rebranding herself again. She claimed that as soon as she gets some good cash, she will go all the way and do herself a skin makeover. That will be her biggest achievement.