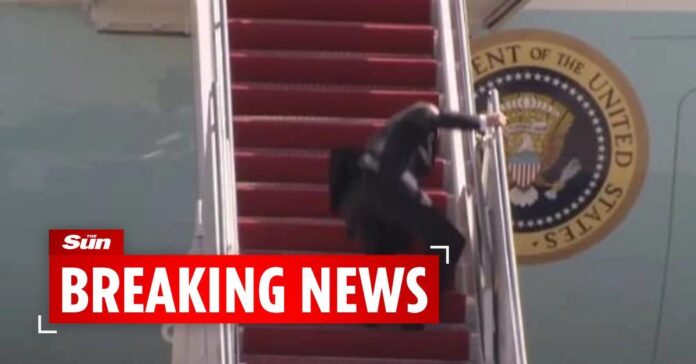 The President of the United States of America, President Joe Biden stumbled and fell on the stairs of Air Force One as he was boarding to fly to Georgia on Friday, 19th March.

Biden stumbles and falls multiple times on his way up the stairs of Air Force One pic.twitter.com/TP1vQly0G0

The president was on his way to meet with the Asian Community leaders in Georgia on Friday, following the earlier this week incident of the shooting at the massage parlor.

Joe 78 years old, was walking up the stairs when he tripped while boarding the Air Force One. After the accident, he quickly rose and continued running up the stairs, and entered the Presidential aircraft, after giving a salute.

President Joe was seen wearing a cast on his right foot outside the Queen theater in Delaware late last year. This is after he twisted his ankle while playing with his dog, Major.

Journalists attached to the Office of the President revealed on Sunday that the president had suffered the injury saying he will be forced to wear the cast for several weeks.

Watch the Video of the accident.

Diamond Gifts His Daughter A Phone, Her Reaction? Priceless!