Chief justice David Kenani Maraga who has been the 14th Chief Justice of Kenya after succession from Chief Justice (CJ) Willy Mutunga has finally retired today 11/December/2020 having served his regime since October 2020.

While launching the Manga law courts which is among the oldest courts in Kenya, he said “Friday will be my last day in office, for I will proceeding for a terminal leave.” His retirement means that the office is vacant thus the Judicial Service Commission will have to recruit his successor. 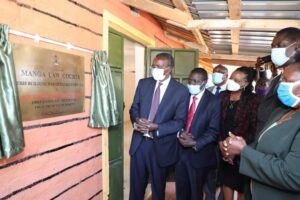 This is necessary since the Judicial Service Commission is to select fit and proper persons for appointment as judges and to investigate complaints about judicial officers. It also advises government on any matters relating to the judiciary or to the administration of justice.

Before his retirement, he had advised the president to dissolve the parliament since it had not met the two-thirds gender rule. This was highly supported by Sir Nelson Havi who was elected as the President of Law School if Kenya (LSK.) However, the case is still pending in court.

During is period as a chief justice;

As Kenyans are looking forward to have a new chief justice, CJ Maraga has been praised for his adherence to the rule of law and above all the fear of God

Irungu Kang’ata Discloses Details On The New Evidence To Be Used...