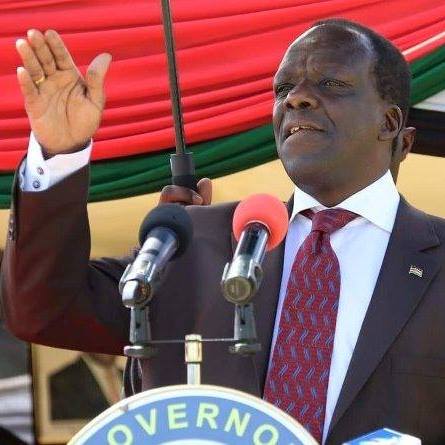 The Council of Governors Chairman H.E Dr Wycliffe Oparanya has urged healthcare workers to call off their strike to give room for negotiations to get a lasting solution to their grievances.

He said healthcare workers are the frontline soldiers in the fight against Covid-19 pandemic and if they continue with their strike many Kenyans will suffer.

He said Covid-19 has crippled the economy making it hard for the National and County Governments to raise revenue for development and dealing with issues raised by medics.

“I plead with our health workers to consider the plight of Kenyans during this Covid-19. Our economy has been adversely affected and addressing their grievances for now will be a challenge,” said Governor Oparanya during the funeral of Mama Priscah Ondiso Anjeyo at Luanda, Vihiga County.

He said the County Governments have not received funds from the National Government for the last three months affecting operations at the devolved units.

“We want the National Government to release the money to enable counties fight Covid-19 pandemic,” he said.

He regretted that many healthcare workers have been affected by Covid-19. 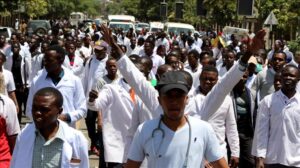 He asked President Uhuru Kenyatta to deal with officers who failed to disburse and pay allowances for the healthcare workers prompting the money to be returned to the Treasury.

“That officer who did not release the money for healthcare workers should be dealt with because he has brought confusion and suffering to health workers” he said.

COTU secretary general Francis Atwoli said most of the medics lack insurance cover and he cannot keep silent while they suffer.

“I advised the Government on how to handle issues raised by healthcare workers and I am still waiting for their response before we make any other move,” said Atwoli.

He criticized Salaries and Remuneration Commission (SRC) for bringing confusion on matters of salaries and allowances for State officers.

The late Oniang’o was his brother and neighbor at home.

The Promise President Uhuru Made To June Ruto After Missing Her...