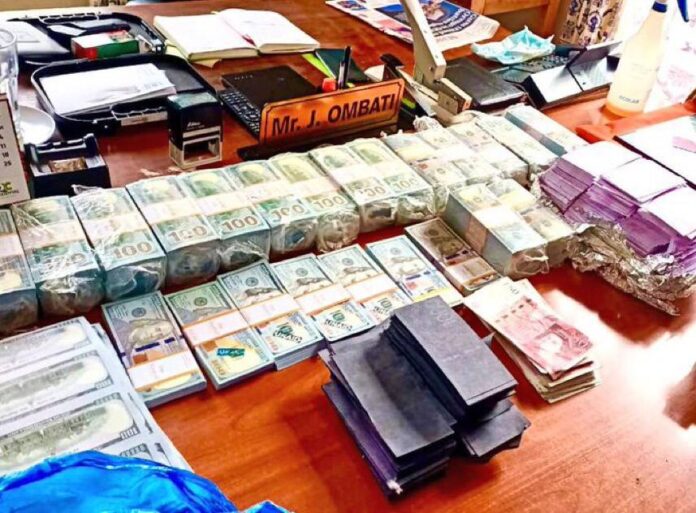 Detectives in Ruiru, Kiambu County have arrested three Cameroonian nationals in possession of over Ksh.350 million in fake US dollars and Pounds.

The three; Paulin Francis Proper, Njikam Omar and Job Kentong, were nabbed in an operation conducted Monday evening within BTL area in Ruiru.

Also recovered from the suspects was 250 kilograms of fake gold nuggets and gold bars, one Glock pistol and 28 rounds of ammunition. According to the Directorate of Criminal Investigations (DCI), two of the suspects were found to be in the country illegally while one holds a refugee identity card.

“Upon further interrogation of Paulin Francis who is the main suspect detectives raided his house in Muthaiga North where the firearm was recovered,” said the DCI in statement.

The DCI further stated that the firearm belonged to a fourth suspect Loise Kaguongo, who was holding it illegally, since her firearm license had expired

Detailed investigations revealed that the firearm belonged to a fourth suspect Loise Kaguongo, who was holding it illegally, since her firearms license had expired.

“Kaguongo operates over 10 mobile money outlets and detectives believe that she is the link between the suspects and a wider criminal syndicate that is defrauding unsuspecting members of the public,” added the DCI.

Detectives based in Ruiru have recovered over Sh350 Million in fake US dollars and Pounds, one Glock pistol and 28 rounds of 9mm calibre, from 3 Cameroonian nationals.

The suspects, Paulin Francis Proper and Njikam Omar were found to be in the country illegally while the third pic.twitter.com/pdeqVAufzD