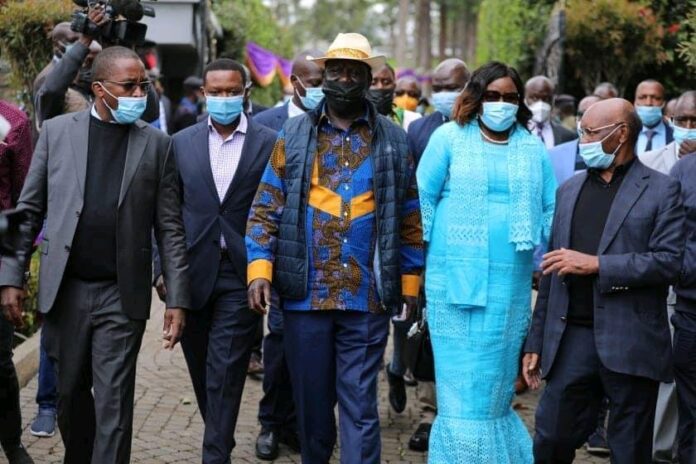 Orange Democratic Movement (ODM) party leader Raila Odinga is reinventing himself politically as far as the 2022 general election is concerned.

It’s quite evident that he is enjoying the support of president Uhuru Kenyatta and some leaders from Central, which has never happened in the past years.

Today, the former prime minister is in Murang’a county together with various politicians and tycoons from the Mt Kenya region where he is presiding over an event where the local artists are meeting to deliberate on skiza tune revenue.

Seems like the TangaTanga previous plan to disrupt the meeting failed and now they’ve come up with new, allegations that ODM party leader Raila Odinga tricked the local Mt Kenya artists into meeting him during today’s event.

Former digital Strategist at the presidency and the current Hustler’s spokes person Dennis Itumbi has alleged that artists were called and told that they will be meeting with President Uhuru Kenyatta to discuss the revenue increase issue, only for the prime minister to appear.

“So musicians got a call: (Kindly attend a meeting at S. K. Macharia home. You have been chosen as one of the representatives of artists from each region in Kenya to go & discuss with the President on Skiza Revenue increase) Even a meeting with artists needs a lie to mobilize,” he tweeted.

What do you think? Turn on the notification bell for more political news

Another online war! Francis Atwoli and Martha Karua In A Heated...

Review: Why Skip Marley Is At A Higher Place