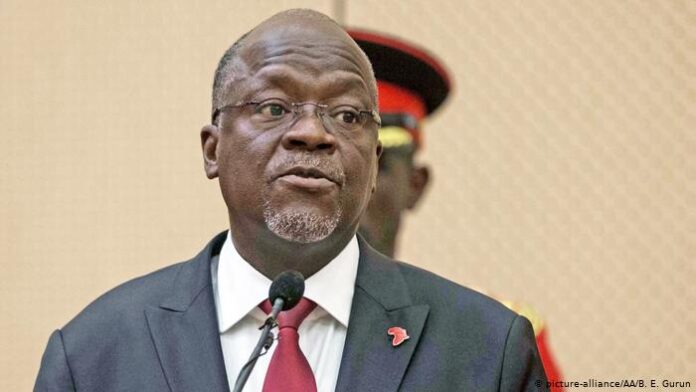 Last year, Tanzania’s President John Magufuli declared that Tanzania had defeated covid 19, opened up school and asked his military to arrested anyone seen wearing a mask.

Magufuli has now termed the Covid-19 pandemic as a “test from God” and called for three days of prayers and fasting to overcome it.

He announced that Tanzanians won against the virus last year and we will against it this year.

President Magufuli made the comments today Friday 19th at the funeral of his chief secretary, John Kijazi, who died of an undisclosed illness while undergoing treatment.

The government spokesperson tweeted the president’s comments, “It is possible this is another test but with God we will win. Let’s not scare each other because we will not overcome. It’s possible we have offended God or we’re being tested and I’m urging that we stand by God.

I ask you Tanzanians if we have slipped let’s continue praying to God and fasting from today, tomorrow and the day after. Religious leaders continue encouraging prayers, we will win. God cannot forsake this nation.”

For months the government has insisted the Covid-19 pandemic was under control and encouraged the use of herbal remedies ginger and Tangawizi.

The vice-president of Tanzania’s semi-autonomous islands of Zanzibar, Seif Sharif Hamad, died on Wednesday – nearly three weeks after his party said he had contracted Covid-19.

He was the most prominent political figure in Tanzania to have openly declared that he had Covid-19.