A human rights activist Edwin Kiama was arrested yesterday evening following the recent outcry of kenyan citizens over the huge loans and debts the country keeps accepting from developed countries and corprations. 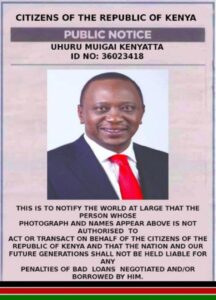 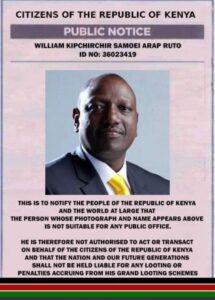 The said activist is accused of making the viral posters shown below which were making rounds on social media for the better part of yesterday and today morning.

This had led to another outcry that has left the hashtag #releasekiama trending for the better part of the morning , overshadowing even the very main one #imfstoploaningkenya.

Following this arrest ,numerous activists have come out to publicly oppose the move terming it as oppressive and dictatorial

Cyprian Nyakundi says that Instead of arresting those looting Ksh 2 Billion per day, DCI is busy with none issues. Abuse of power and wastage of state resources #releasekiama

on the other hand Denis Itumbi feels that ‘PRESIDENT Kenyatta told us you can insult me, you will NOT be arrested for that, it is your opinion feel free to express it. @InteriorKE PREFECTS, by sharing a Poster, Kiama did NOT insult anyone. It may NOT please some, but it is NOT illegal! #ReleaseKiama’

Madam Sarah posted ‘A comrade is spending the night in Central today for allegedly creating the below post. In solidarity I have posted it as well.

Activist mutemi wa Kiama is currently at the milimani law courts with the DCI.